The cannabis industry has created some truly fascinating cannabis related products over the last 8 years—from blunts to vape pens to concentrates to dabbing to THC and CBD strips, and everything in between. It seems like every other day, someone gives us another way to consume cannabinoids. Case in point: THC distillates.

You may not have heard of this cutting-edge product (it’s probably why you’re here, right?), but take our word for it, you’re going to want to try it. Why? Because THC distillate has been tested at almost 99 percent pure. That makes for one heck of a righteous high! But it also raises a host of questions, like:

The experts at Honest Marijuana will answer those questions and tell you everything you need to know about this newest cannabis craze.

What Are THC Distillates?

A distillate is the end product of a process called—wait for it—distillation (duh, right?). Distillation involves separating the chemical components from a liquid mixture by controlled boiling and condensation. If you’re at all familiar with moonshine, The Dukes Of Hazzard, or the hills of Kentucky, you’ve probably heard the words distiller, distillery, or even still.

That’s because humans have been using the distillation process to refine their alcohol for decades, if not centuries. So it’s really nothing new. What is new, though, is applying distillation to cannabis plants and cannabis concentrates in order to extract the purest cannabinoids possible.

The basic definition of distillation (and distillate) as outlined in the previous paragraph is a good start, but to truly understand why distillation is so significant, we first need to discuss two topics:

Once we’re through those, it will be easier to explain how THC distillates are made. And if those subjects seem a bit daunting, don’t worry. We’ll keep it as simple as possible.

The best-known cannabinoid is THC, but there are 113 in all (including CBD, CBG, CBN, and CBC), and more are being isolated every day. Cannabinoids are chemicals that interact with the endocannabinoid system in your body and brain to get you high, decrease your anxiety, and relieve your pain.

Terpenes are oils that give the pot plant its unique flavor, smell, and medicinal properties. Flavonoids are molecules within the plant itself that combine with the terpenes to produce distinctive tastes and aromas like that given off by the famous Sour Diesel strain. Terpenes and flavonoids can make your ganja taste fruity, earthy, or even zesty.

The thing about cannabinoids, terpenes, and flavonoids is that they all have different boiling points. “Why is that relevant?” you ask. Because separating these chemicals from the marijuana plant without completely destroying them is the ultimate goal of producing a THC distillate. For that, we first have to learn about cannabis concentrates.

Concentrates, a.k.a. extracts, are all the rage right now, and for good reason. They are exactly what their name implies: concentrated versions of the cannabinoids found in store-bought bud. So if your favorite Fruity Pebbles strain measures in at 12 percent THC, the concentrate taken from that same strain could double or triple the potency if processed correctly.

Concentrates are made through a process called solvent extraction. Cannabis plant matter is soaked in chemicals such as isopropyl alcohol, chloroform, carbon dioxide, propane, butane, or even ice water. The solvent strips the plant of its cannabinoids, terpenes, and flavonoids and holds them in a liquid state.

The solvent is then forced to evaporate (through a change in pressure or temperature or both), leaving behind a gooey liquid (like honey) that contains nothing but canna-goodness. The final product is then allowed to harden into shatter or wax for use as fuel for all your dabbing fantasies.

Sounds like the holy grail of cannabis consumption, right? The most perfect form of cannabis that money can buy? Well, sorry to burst your bubble, but it’s not even close. THC distillates claim that top spot. Here’s why.

How Are THC Distillates Made?

As already mentioned, concentrates are usually produced by raising the pressure and/or temperature at some point during the extraction process. The focus of the solvent extraction is usually the cannabinoids THC or CBD. The problem with focusing on just the cannabinoids is that the other beneficial chemicals in the marijuana plant—terpenes and flavonoids—have very different boiling points. So in the process of extracting the cannabinoids, the terpenes and flavonoids are usually destroyed. This dramatically affects the purity and potency of the final concentrate.

But by using steam distillation and fractionation, ALL of the cannabinoids, terpenes, and flavonoids can be collected in one final product without any leftover solvents. That’s how THC distillates can weigh in at 99-percent purity. The complete process can get pretty complicated and requires some specialized equipment, so you really can’t do it at home. But to give you a general idea, here’s how steam distillation and fractionation are done:

There’s alot scientific information that goes into it, but that’s the basic technique. Having trouble visualizing the whole thing? Thanks to Wikipedia, you don’t have to use your imagination. Here’s a simple illustration of the distillation process (the action goes from lower left to lower right). 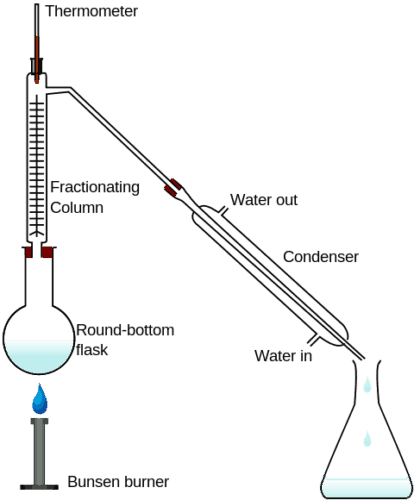 When all is said and done, you’re left with an amber liquid about the consistency of thick honey. You allow the distillate to harden (or keep it as an oil), and you’re good to go.

Again, there’s a lot of technical knowledge that goes into creating a distillate, so we don’t recommend trying it at home no matter how simple we’ve made it sound. Stills can explode if not operated correctly, and we’d hate for you to get injured trying to make something you can (or soon will be able to) buy at your local dispensary.

There are many advantages of using THC distillates, such as:

And these are just the tip of the iceberg. The advantages run the gamut from storage to transport to cost per gram. Distillates really are the next phase in the evolution of cannabis consumption.

But that raises the question, “How do you use THC distillates?” Read on to find out.

How To Use THC Distillates

Even though THC distillates are relatively new, they can be used in a variety of tried-and-true methods, so you don’t have to change how you get your dose of THC or CBD. Distillates can be used in the following ways:

There really is no end to the ways you can use THC distillates. The only limit is your imagination. So give THC distillates a try to find out for yourself if they’re right for you.

We have a following of 24,000 followers and over 18,000 business likes on Facebook. We have access to dozens of businesses that have been vetted by us and have the required qualities to be worthy of your investment.