Inhaling the vapors of cannabis concentrates has been in fashion for many years, but advanced hash oil extraction methods developed over the last decade have led to a flood of cannabis concentrates with which to medicate and recreate. If you’re involved with cannabis on any level the then things like “shatter” and “solvent-free extract” are already a part of your lexicon, as are consumption techniques such as “dabbing”, but the subject of cannabis extracts can also be one of the most complex things that new cannabis users come across. Questions like: Why do some extracts require further heating to make them psychoactive while others, like RSO come ready to ingest? Once terms like “decarboxylate” are understood, further distinctions like quality, dosage, expected effects, and ways to consume come into play.

How many types of cannabis extracts are there?

A cannabis extract is any oil that concentrates the plant’s chemical compounds like THC and CBD. Some of the earliest extracts were created by using a solvent to pull the THC and other cannabinoids out of the plant to create a sticky oil. That oil then settles into one of several forms depending on the desired effects of the extractionist.

Marijuana extracts are nothing if not an art form by now, and that’s one of the reasons there are so many types of extracts available on the market today. Like craft beer, there are so many different variables that can change the outcome of the product that extraction experts are often known for their unique style of creating their signature extract, from crystal clear shatter to creamy budders.

On the patient side, the reasons for demanding more extracts and better extraction methods varies but generally has to do with wanting more intense and long-lasting cannabis effects without the harm done by smoking the dry flower. Plus the extraction process makes sure that non-psychoactive compounds like CBD and the aromatic oils called terpenes are also extracted and not destroyed by too-high temperatures as they often are when smoked in a conventional paper joint, bong or pipe.

Many refer to concentrates as simply “hash”, short for hashish, because that was one of the oldest examples of concentrated marijuana product. It has been produced for thousands of years and is still a preferred way of consuming the plant in places like Morocco, Lebanon and Nepal where the practice began. The old style of hashish come in bricks of sticky brown or light brown material that is smoked in a similar way to dry cannabis flower but doesn’t really come close to the intensity and purity of the kind of extracts that are created with solvents or a heat and pressure system. To further explore how sophisticated extractions have become, let’s break down some of the most common types of extraction methods and the kinds of products they produce: 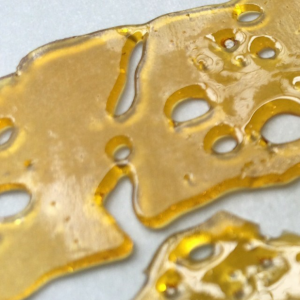 (Shatter is golden to dark amber and often has holes like swiss cheese that were left behind as carbon dioxide bubbles escaped while purging.)

Butane Hash Oil, or BHO, is made by passing butane through the cannabis flowers and/or sugar trim to extract all the good stuff—those medicinal cannabinoids and terpenoids. Butane is pressurized and washed over dry cannabis flowers and stems before being purged in a vacuum chamber, which helps to remove harmful chemicals and impurities from the final product. The look and feel of the finished BHO product can vary, from solid and brittle to soft and gummy, and each one has a name (and its own fan following). With THC content of up to 80-90%, and total cannabinoid content of 60-90%, BHO is a popular way for those who need relief from chronic pain and sleep disorders to medicate effectively. Propane and hexane can be used to create a similar product, different only in look and flavor. Some crafty extractionists even blend gases to produce a signature product that is totally unique. Impure BHO could contain butane, contaminants, and even pesticides so look for lab testing information on the product before you purchase.  Here are some of the forms a final BHO extraction may take:

That list might make you think that there is a big difference between the styles of extract but the truth is that the difference is, in most cases, purely superficial. Plus, they can be made with hash oil extracted in several other ways. While butane extraction is highly volatile because it involves flammable gases, methods like supercritical or subcritical CO2 and ethanol extraction have less of a risk profile and deliver a product that compares in consistency, though potentially less so in potency, to the subtypes above. Here’s more on those other methods of extraction and you can choose which one sounds best to you.

Supercritical CO2 oil is created using carbon dioxide compressed at high pressures and heat to create a “supercritical fluid” that extracts the compounds from cannabis just like a solvent would. The CO2 extraction process also allows trichomes and essential oils to be extracted without damage or contamination. The resulting oil has a consistency slightly thicker than olive oil and typically measures at about 60 percent and 80 percent total cannabinoids. CO2 extraction is for many reasons preferred over the butane method—being non-flammable and solventless has it’s benefits—and is something we already use in food, dry cleaning and herbal supplement production. It’s also the process used to remove caffeine from coffee beans so that your late afternoon cup of decaf doesn’t result in a sleepless night.

This extraction method uses food-grade alcohol (ethanol) as a solvent to strip cannabis of its medicinal compounds. The alcohol is evaporated from the solution and what is left behind is often refereed to as full extract cannabis oil, or FECO. Some methods of ethanol extraction, like QWISO, makes it possible to create shatter using this method.

In 2003 Rick Simpson came onto the cannabis scene in a big way. He claimed to have treated his skin cancer using a homemade remedy made from cannabis. His method involved soaking the cannabis in pure naphtha or isopropyl alcohol to draw the cannabinoids and terpenoids out. The resulting molasses-like mixture performs at its best when taken internally. That’s right—no smoking necessary, unless you want to add a blob to a joint for an extra boost of relief. The biggest drawback of traditional RSO is the potential for consuming left over solvents and petrochemicals if it is not properly purged. Most RSO found today is actually made from alcohol.

Isolates are the singling out of any one (or several) cannabinoids which is then extracted and processed until it forms a white crystallized end product. Imagine firing up a medicine that was 99% THC-A (the acid, non-psychoactive form of THC), or the terpene of your choosing. That’s basically what isolate products are. In dispensaries you will typically see isolates displayed and sold in small glass jars.

Rosin is the product that opened the door for several different new products. Rosin shatter, for instance, resembles the BHO kind in appearance but was made with only heat and pressure applied to dried cannabis buds, trim or kief.

The interesting thing about rosin is that it can be made with nothing more than a standard hair straightener, parchment paper and some elbow grease. The amount of pressure and heat applied to the hair straightener, and the heat setting that it is on, will dictate the consistency of the rosin produced. Higher temperatures create something that looks like shatter, while lower temperatures create a rosin that is more like a gooey wax; either form with measure at about 50-70% cannabinoid content.

Rosin isn’t available as widely as the other types of extracts mentioned here but it’s recognition and popularity are growing because the process is cleaner and less risky than solvent-extracted products, which have been known to blow up a house or two over the years.

How are marijuana concentrates used?

With the exception of RSO, which can be taken orally, most of the extract products above require some heat to make them vaporize and to decarboxylate the THC-A or CBD-A to turn it into THC or CBD.

A “dab” is the slang term for a dose of extract that is heated on a hot surface, called a nail.

Here are some of the other terms for equipment you may need to heat, vaporize and inhale your extract.

The payoff with this method of consuming cannabis is that it delivers all of those concentrated cannabinoids and terpenes in one thick vapor. When it comes to easing intense symptoms, it’s a wonderful delivery method. However, dabbing does come with some setbacks. One of the realities about regularly consuming concentrates is that the super-concentrated power of extracts can flood the endocannabinoid system with what can feel like an overdose. Uncomfortable highs and paranoia can be a risk when one begins consuming high quality concentrates, not to mention the intense coughing that the thick vapor can bring on.

The best way to medicate by dabbing is to be cautious at first and learn how to measure out tolerable doses. If one gram of an extract contains 800mg of total cannabinoids, fairly typical for a BHO extract, it would be almost impossible to obtain a 5mg (or the starting recommended dose for edibles) dosage out of a total sample the size of a quarter.

There’s a reason why marijuana extractions now have their own categories in all the biggest cannabis competitions. It’s the combination of flowers, technology, chemistry and craftsmanship that goes into extracting the parts of the cannabis plant that seems to be the most intriguing and customizable part of the industry so far. And it’s exciting for many old-timers to see what was once a feared plant become a livelihood for so many people. It’s these innovators that will continue to push cannabis extracts to its limits, further refining potency, quality and ease of consumption.